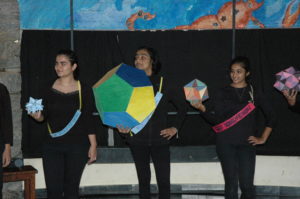 Platonic solids, also called the ‘regular solids’, are three-dimensional geometric solids. Their faces are all congruent regular polygons, such as triangles or squares and the same number of polygons meet at each vertex. Interestingly there are only five such Platonic solids: the tetrahedron, octahedron, icosahedron, cube and dodecahedron. This result was known from the time of the ancient Greeks and Euclid proved it in his famous book the Elements.

Two of the non-convex polyhedra were first discovered by Kepler

Students studied the properties of these solids. They understood what duality means and they learned the proof (both Euclid’s method and the one using Euler characteristic) that there are only five Platonic solids. We are yet to learn why there are only 4 Kepler-Poinsot polyhedra. They made models using nets and origami.

This project culminated in an unusual fashion parade in our morning assembly!