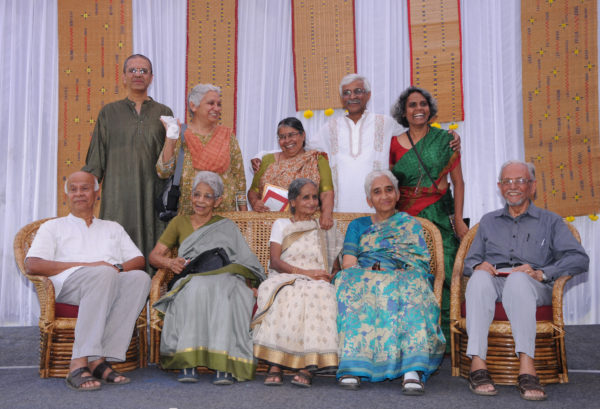 Venu is a member of the founding group of CFL and was a member of the Governing Council till 2019. He has degrees in engineering from the University of Madras and management from Indian Institute of Management, Calcutta. An interest in Krishnamurti’s teachings led him to leave the corporate sector and join The Valley School in 1989 and later become part of the group that started CFL. In CFL, Venu was a teacher and also had administrative, legal and financial responsibilities. In 2010 he was invited by Azim Premji Foundation, Bangalore to be part of the core group envisioning Azim Premji University. Venu is currently the Director of the School of Arts and Sciences at the University and a member of its Board of Management.

Vijaya Lakshmi Jaithirtha has a PhD in English literature and has taught middle and senior classes in Krishnamurti schools for more than 25 years. She was with CFL right from its inception in 1990 up until 2004. Currently, she teaches at Shibumi school, of which she is a founding member too.

Yasmin Jayathirtha has an MSc from IIT, Bombay and a PhD in chemistry from the Indian Institute of Science, Bangalore. She did postdoctoral work at the University of Louisville and the Indian Institute of Science, Bangalore. She is interested in science education, particularly in developing experimental activities using simple materials. She writes regularly on science activities, and is currently involved in the teacher education programme at Azim Premji University, Bangalore.

Richard Fernandes has a MSc in Physics from the Indian Institute of Technology, Kharagpur and a PhD from the Raman Research Institute, Bangalore. He was a research associate at the University of Louisville and later worked at the Indian Institute of Science, Bangalore. At CFL, he developed an experimental curriculum for teaching physics from middle school onwards, substantially with home built apparatus, thereby debunking the notion that experiments require big money equipment. He currently teaches undergraduate physics in the School of Arts and Sciences, Azim Premji University, Bangalore.

Vandana Srivastava worked in the private sector after completing her MBA at the Asian Institute of Management, Manila, Philippines. Her deep interest in working with young children led her to join The Valley School, and she was later part of the founding group of CFL. She helped develop and implement the junior school curriculum and worked closely with children of all ages. In addition, she held various administrative responsibilities till 2019. Currently, in addition to pursuing her interests in pottery, stitching and painting, Vandana is developing and conducting workshops to bring mindfulness practices in some of the schools in Bangalore.

Kabir Jaithirtha (1949 – 2018), a BSc and PGDM (IIM Calcutta) graduate, was a trustee of the KFI (Krishnamurti Foundation India). He had over 35 years of experience as a teacher and administrator in KFI schools, CFL and Shibumi. He was with CFL right from its inception in 1990 up until 2002 and was one of the founding members of Shibumi school.

Valli Seshan has spent a large part of her working life with non-governmental organisations engaged in development work. She has worked for Action Aid, helped start SEARCH and coordinated the International Resource Centre of Service Civil International. She actively participates in thinking about the educational vision of CFL, and has been a huge support ever since the idea of the school emerged in the minds of the founding group. CFL functioned from her farm ‘Shibumi’ just outside the city till it moved to the current campus in Varadenahalli.

Kamala Subramaniam, or simply ‘Kamalaji’ as she is fondly referred to now, has worked with children all her life. Beginning with Children’s Garden School, Chennai, then Vidyaranya, Hyderabad and ending with CFL, with a long Valley School stint thrown in the mix, she has been an integral part of most of the schools right from their inception. CFL in fact began on the terrace of her house and even today the walls of ‘462’ resonate with the sounds of adults and children alike. An avid reader, she continues to be interested in education; she is involved with Shibumi and has volunteered at Parikrama.

Usha Mukunda completed her BA (Hons) in English Literature from Presidency College, Kolkata. After a gap of 20 years, she ventured back to the University to complete her Master’s degree in librarianship from Bangalore University. Usha initiated the concept, spirit and actuality of the open library at CFL and thereafter at diverse schools. She is deeply interested in nurturing discerning readers and users of the library, not only at CFL but in all places where children abide.

M K Anantha Swamy grew up in a business family in Bangalore, and was first introduced to J Krishnamurti’s work in 1956 when he attended the philosopher’s public talk in Chennai. He was associated with the activities of the Krishnamurti Foundation India and was instrumental in helping found the Bangalore Education Centre (1974) and the Valley School (1978) of which he was the secretary for 12 years. He was part of a group of several teachers from the Valley School who decided to start Centre for Learning in 1990. Although he retired from his business activities in 2010, he continues his association with these educational institutions.