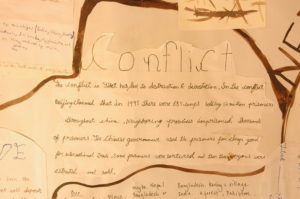 Over the span of CFL’s life, a diverse array of projects have happened in the middle school. These projects broadly fall into the areas of science and social science. As part of our thinking about these courses, we have tried to pay attention to curricular goals, skills, approaches and themes. In all projects, we value the possibilities that “direct contact” opens. These may be in the form of working with data in a lab or learning about a place and people through interaction.

Our students are grouped into age groups that span around two years each. Each group is named after an indigenous tree. The palasha tree stands out in our landscape when it is in bloom.

Its large fiery red flowers make it seem like a tree ablaze. It is a lovely sight. Our eleven to twelve year-old Palasha students this year are an equally vibrant bunch.

During the months of June, July and August 2015, our Palashas  were part of an  “Our Neighbours” Project. The intention of this project was to imbibe a sense of life in parts of South Asia by engaging with photographs, maps, people, documentaries and narratives.

Students spent time “reading” large black and white photographs from across south Asia, spanning space and time. We explored what it means to learn from looking, to see what we can say about people, places and events as we take in a picture and to look at the clues we use as we respond. This made us aware of stereotypes in our minds as well as categories of clues we use to place an image. We read maps from the 18th and 19th centuries, we tried to see why maps were made, what they depicted, the reasons why maps may be different. This helped us appreciate the changing depictions of a region.

An exciting endeavour in the Our Neighbours course was an exchange of letters with newly found friends in Pakistan. Our students corresponded with members of the Insaf Foundation Trust in Islamabad and with twelfth standard students from The City’s School Bhit Shah, in Bhit Shah, Sindh.

We learned that our student friends in Bhit Shah intiated an Indo-Pak Peace Project in 2015. As part of this, they had organised an exchange of paintings between children across the border. We enjoyed learning about their day at school. We also enjoyed learning about the city of Bhit Shah and the beautiful mazhar of the Sufi poet Hazrat Shah Abdul Latif, whose verse or bait is sung across Sindh, which includes parts of Kutch. 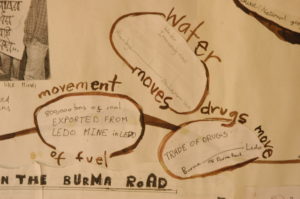 In their letters, our students narrated accounts of their lives at home and their lives at school. They described the boulder strewn landscape we live in. They talked about the range of engagements they have in school, from math and English to woodwork and football.

Friends at the Insaf Foundation Trust in Islamabad, who work on issues of Peace and Justice, wrote warm letters to our Palashas. Amongst many accounts, they describing their interests in art, music,drama and jewellery-making. They described the mountainous city of Islamabad . They shared brief stories of their elders from the time of the partition.

As a final project, we made a large poster which brought together our learning from the term. This includes both the process through which we learned (interpreting photographs, interpreting maps) as well as some topical pieces based on National Geographic articles. Our poster offers glimpses of life in parts of south Asia.  It highlights themes such as migration, refugees, faiths/practices, trade, that stretch across political boundaries. In fact, our poster, which has themes and images placed on a NSEW framework, has no boundaries at all. 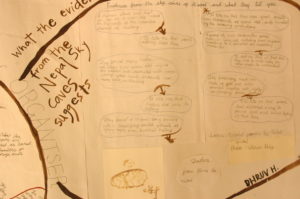 ldren will now move on to other projects and other engagements. The glimpses they have encountered of lives they had little contact with earlier may fade and perhaps appear at a later time. This may have been the only instance where our children hand-wrote a letter to a farther land. Some of them may feel drawn to handwriting another letter, some time.