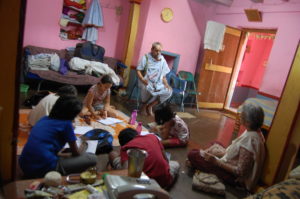 During the early monsoon months of 2015, our eleven and twelve year-olds spent a term making several trips to Motaganahalli,  a large medieval village fifteen minutes north of CFL.

The students were keen to learn about life in this large village close to the school. Their exploration began with questions:

How can we get to know our neighbourhood, its history, its current story, its people and spaces?

A very real and immediate way was to take a walk. And this is what we did. As we moved through the streets and by-lanes of Motaganahalli, we were drawn to various aspects of life: houses, different types of shops, a variety of occupations, religious buildings, and water sources.

The children talked to people they met. Initial conversations led them to meet even more people, within and outside homes and at work places.We set up interviews with particular people.Very soon, we had spoken to the temple priest, the mill owner, a power loom operator,a  madrassa teacher, and two elderly people.

In this process came in discussions about the difference between fact and opinion  Students were able to discuss and understand different kinds of evidence and information, primary and secondary. 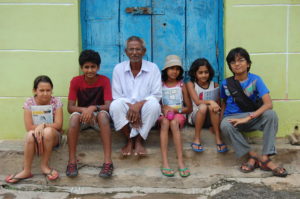 We talked about caste and access to resources, such as water and electricity.  We talked about the presence of gender bias. We discussed the impact of  mechanisation of labour and about what
“development” means.

We formed affectionate relationships with people we met. We returned to share the booklets that we made, based on people’s stories and on our own research using secondary sources.

One of the children asked why Motaganahalli had not become a city. This offered a perfect segue into the question of what creates a city.and therefore a great opening to explore  the origins of Bangalore city, which most of the children inhabit. We read about the early years of Bangalore as a commercial settlement. and made a trip to the centre of the city. We learned about the history of this region as we went on a walk from Tipu’s Palace, past the old fort and towards the petes of City Market, where tradespeople continue to live.

Here we met the owner, an uncle of a student, of a herb shop which has been running for two generations in this location. It was interesting to hear from him about trade in the pete.

We are thankful to Meera Iyer of INTACH who volunteered her time and was a well of information and stories about Tipu’s place and Bangalore fort. This really brought the trip alive for us.

Letter from an old student