In the winter of 2016, nine twelve year-olds and two teachers set out on a riverine and coastal walk.

We walked alone, in pairs or groups. We walked quietly or chatting softly, exchanging observations of our surroundings or just sharing stories from our lives, but, walking most of the time. 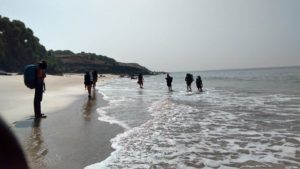 The landscapes were varied and wide: some breathtaking in their beauty and others striking in their filth. Beginning at an erstwhile trading town, Kharepatan, on the southern bank of the Vaghotan river, in Maharashtra, we walked and boated along the Vaghotan through verdant farmlands and garbage-lined shores, over vast ghostly, grassy cliff -tops. We waded through wet river streamlets, criss-crossed the river in a boat, swam in its waters but mostly, walked along its banks for fifty-five kilometres till we reached its mouth at the Arabian Sea in Vijaydurg.

The river widened mightily each day and as we reached the Arabian sea, the massive mouth was hardly recognisable as the same narrow river we had started our journey on just three days earlier! We noticed the salinity increasing during our daily swims.

The hospitality of communities and people along the way taught us a lot about the spirit of generosity: how people share time, space and resources; how people give of themselves to complete strangers expecting nothing in return. We were moved by the spirit with which our hosts opened their homes and kitchens to us!

Now turning south, we walked about eighty-five kilometres from Vijaydurg to Malvan along the Arabian sea; along her white sandy beaches and in her glass-like waters; up and down her headlands;sometimes flanked in foliage and at other times rocky or covered in a carpet of golden grass. Here too, as we moved further south, we noticed more evidence of human presence – garbage washed up along the high-tide lines.

But we savoured the sense of solitude between settlements, the sense that there was no one else but us on this tiny dot of a coastline. We returned the greetings of dolphins and seagulls having their own gatherings nearby; met two long fish and a myriad tiny crabs in the shallows. Sadly, we also encountered a dead turtle, cow, eel, puffer fish and shark. 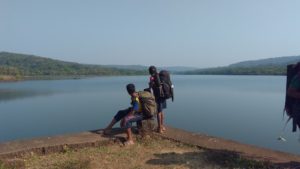 All along our way, we received  the hospitality of many people – everyone from migrant labourers from Karnataka, to local residents and people in hotels and lodges where we stayed.  It was a humbling experience.

As we left the coast we realized that 8 days of eating healthy meals and walking 15-20 kilometres every day with 6-10 kilograms on our backs made us all a little more fit and a little less fat!

From our archives : Trek in the Himalayas, 2011