In the month of November 2017, the whole of our village Vardenahalli was gathered on the CFL campus to watch a spectacular Yakshagana performance, Sudarshana Garvabhanga.

Yakshagana is a unique traditional dance form of the Dakshina Kannada district of Karnataka. It is a performing art form where music, dance, dialogue, elaborate make up and costumes come together to weave grand, eloquent stories. Yakshagana performers often choose stories from the Mahabharata, Ramayana and Bhagavat Gita.

Tarakit Kala Kammata, the performing group of the evening, hail from Dakshina Kannada. This group was founded by a former parent of the school, Vani Periodi. The group’s unique feature is that it is an all girls group, with young girls and women performing all the roles. It was a treat to see such youthful energy in the narration of a mythological story, and an added delight to see our former student Indu Periodi performing Lord Vishnu’s role so effortlessly. 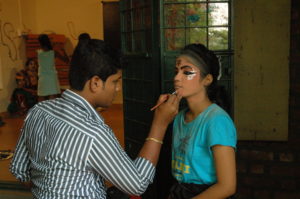 The play Sudarshana Garvabhanga is based on the personified character of Sudarshana Chakra, Vishnu’s weapon – a spinning, disk with serrated edges. The story itself begins with Goddess Lakshmi praising Vishnu, and Sudarshana Chakra feeling hurt and angry that all the credit for defeating the asuras (demons) is going to Vishnu alone. Sudarshana, overwhelmed with an injured ego, wants to show Lakshmi and Vishnu how important and capable he is. He vents all his anger and frustration, claiming boastfully that Vishnu wouldn’t have defeated any asuras without his help. Vishnu, being Vishnu, listens to Sudarshana calmly. Sudarshana Chakra goes away to prove his valour.

Meanwhile, the asura Shatruprashudana, who has been blessed with a boon from Lord Shiva, begins to bother all the devas (gods). Shiva’s boon renders Shatruprashudana powerful and almost invincible, a boon that ‘no human or God can kill him, but only a weapon which comes to life may defeat and end his life’. 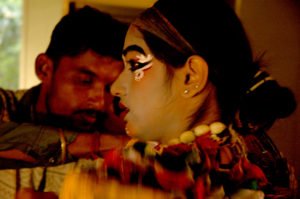 Shatruprashudana having menaced all the devas, defeats Indra and takes over Devaloka, the abode of the Gods. Indra comes to Vishnu for help but Vishnu gets defeated by Shatruprashudana. Finally, Sudarshana Chakra kills Shatruprashudana and feels fulfilled in his quest to prove himself worthwhile. He goes to Vishnu to show off but Vishnu reminds him that the victory would not have been possible without the boon. He propounds that one has to emerge victorious over one’s own ego, rather than over anyone else. The play ends with Sudarshana Chakra feeling ashamed about not having seen this truth for himself.

The performance was mesmerising! No words will be adequate to describe the rapt experience we had that evening.