In Kannada, Kallu means Rock. The ancient temple at the edge of Kalluru village, a half an hour walk from CFL, could well have been built from rocks carved out of the nearby landscape. There are large granite outcrops here. Carrying granite to the site would have been easier than having to transport it from far.

We are used to wondering about time in years and dates. But this temple only gives us clues about when it may have been made and the life it may have seen.

Years ago, the oldest village elder, Hanumanarasaiah, told us of how the temple was built in the time of Veera Ballala, a Hoysala ruler. This area was under Hoysala rule around a thousand years ago. A local legend tells of how the temple had a big copper door which disappeared. Ten years ago, our middle school children found similar lotus-like carvings on roofs in Kalluru and a nearby temple complex, the Ranganathaswamy temple. They wondered if the temples could have been built around the same time with similar motifs prevalent? Or did the motifs endure and they were used over a long period? The narasimha, or lion on a Kalluru pillar, resembles the familiar the Hoysala lion. 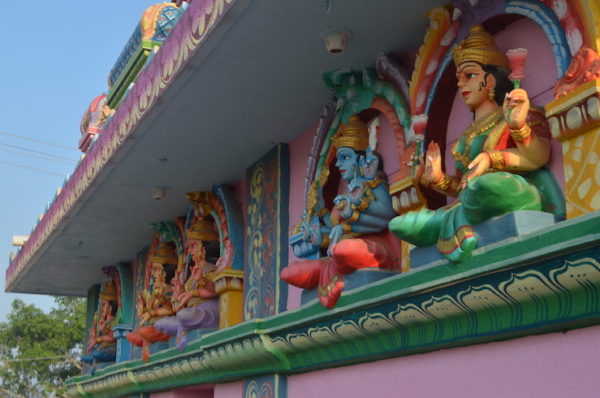 Our ten year-olds found inscriptions along an outer wall panel. Could this be Halle Kannada, Old Kannada?

We wondered. There seemed to be some Tamil letters as well.

A stone structure with a stone roof, housed four pillars with base relief sculptures on all sides. 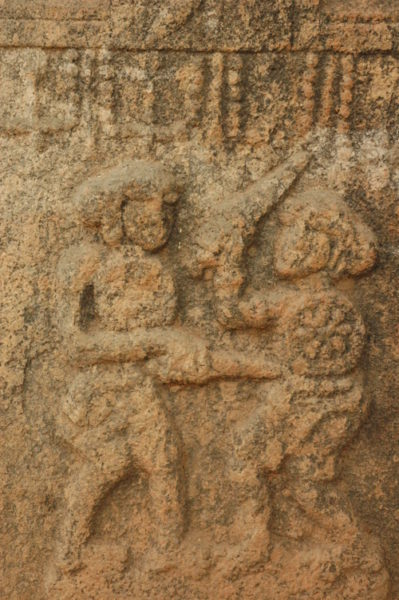 Ubba Chitragallu. Children drew some of the images and speculated about whether the sculptures spoke of a life in the past and about who some of the characters may be. They drew a peacock, a lion and a person leaning on a stick with a goat nearby. They drew acrobats with limbs locked in a circular formation.

Children encountered these clues and sensed how Time may be sensed through folk memory, images and symbols.

Children have explored the Kalluru temple site over the past eighteen years that we have lived in Magadi taluk. We have walked to Kalluru scores of times. Looking back on early walks, there was a narrow bumpy earthen path. You may meet cows on their way home, a boy on a bicycle, school children walking home barefoot from nearby Bachenhatti, with heavy book bags.

As several middle school children have done, a group of middle schoolers explored the Kalluru temple in July 2018. This was part of a Local History Project. They had visited a few places in the vicinity.

We looked yet again at the relief sculptures. We made guesses. What does a relief sculpture of a dancing woman suggest? And the figure playing the flute? Does it have anything to say about the sculptor at all? Did sculptors draw on their own imagination or did they just receive designs and images?

We talked about evidence and finding meaning and speculating.

The change in Kalluru temple was well on its way. Around seven years ago, large plaster figures appeared, atop a flat stone entrance. They were painted light yellow.

The road widened. Still bumpy but wider now. A car could come through comfortably. Some stone carvings lying in the courtyard were cleared away. A metal door with a mesh window covered the closed mantapam.

In July 2018, our Local History middle school team went to Kalluru temple. It was a long time since I had been there. I had glimpsed inside, but what we now encountered was incredible. Not a total transformation, but a dramatic amalgam of the seeming ancient and the seeming present.

Elaborate stucco sculptures perched on the entrance way and other structures. Sculptures painted with all A manner of colours. Extremely intricate art work done by skilled artisans. A juxtaposition of rough granite and smooth plaster. What was made centuries before and what has now arrived, collapsed almost into one. 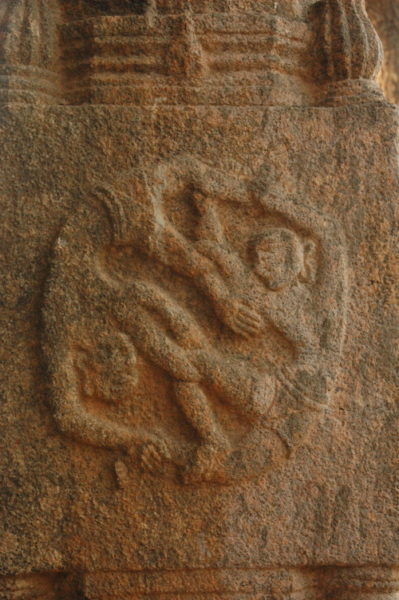 The mantapam was open. In place of the earth floor which we used to sweep and which sheltered cows at night was a shining pink granite floor. The temple priest, the pujari, welcomed us in. In our Local History class we had attempted to learn about the stories of places and people. We sat down on the granite floor. The pujari held forth about life in his grandfather’s time. Some of the children wrote notes.

People extracted oil from the seeds of the ippe mara trees.

The ippe mara trees were grown before the pujari’s grandfather’s time.

There were fewer illnesses.

Children learned letters by drawing them in the sand.

They swam in wells.

We listened to the recollections.

One of our children drew a broken sculpture in the courtyard of a seated figure, broken at the waist. Nor torso or head. Only a belly and cross-legged legs. A semblance of cloth visible across the lower part of the body. A clue about clothing at some period.

The most recent group of middle school Local History students made an exciting “discovery” in March 2019. While trying to copy and make rubbings of inscriptions along outer panels of the temple, they poured water over the engraved letters. And the letters magically appeared, much clearer than we had ever seen them! The students went to work copying down strings of text. As they wrote and as we later examined the findings a few observations appeared:

There were Telugu, Tamil and Kannada letters in these inscriptions.

There were a few names which seemed to be the name of a woman and names of places. 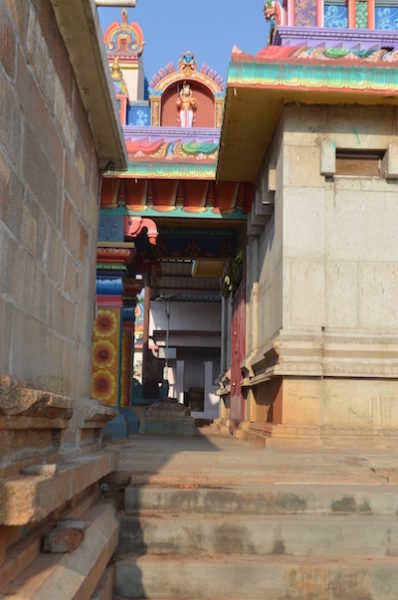 In our discussion, we wondered what this meant. The students suggested that the woman may be connected to the temple in some way, perhaps the priest’s wife? Multiple scripts suggested the presence and interaction of people with varying and connected cultures.

While the eleven year-olds have explored, made drawings and now uncovered inscriptions, a few senior students of Photography and I came to Kalluru with on an early August morning. They were stunned, as I had been, at the transformation.

They had been to Kalluru innumerable times, over their school life. The dizzying splash of colours, the intricately sculpted stuccos caught the eye. But so too a small black granite lotus with incense burning nearby and a pair of dark granite feet sculpted on the ground.

The students, two young women, roamed the site, finding their frames, before bright sunlight shone in.

For our eleven year-olds, stepping into this temple complex for the “first” time, what they see and encounter is a reality that may not alarm. They explore, describe and wonder.

What does such change mean?

Can we even reach for the significance?

Are the meanings we suggest fairly subjective, each of us with our own perceptions?

What does such juxtaposing of the ancient and the modern, an amalgam that may seem alarming to some and celebratory to others mean?

The story of Kalluru, fascinating and mysterious at once, may only become more intriguing as we move into the coming time.

And our children as explorers and story tellers will have more to unravel and more stories to tell.