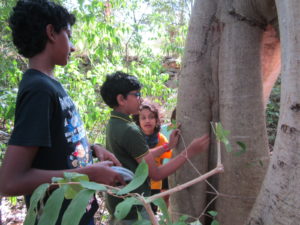 At CFL, our melas have been a chance to collectively delve into diverse realms of exploration. Melas occur every two years. We choose a theme we would like to explore and in smaller groups, adults and children immerse themselves in a six-month long process where we follow ideas, embrace the unfamiliar,engage in a learning that allows for play and imagination.

Mela themes over the years have included Math, Toys, Astronomy, Land and Magic. In 2016, we chose to have a Mela that would bring us closer to the world of plants, creatures and natural movements on the wilder parts of our campus.

We called the Mela the Story of a Tree Mela. From June to November 2016, four groups spent almost a hundred hours around four prominent native trees. The idea was to spend long hours in a given area, in order to become familiar with the tree and its surroundings.

The trees we chose were:

a Honge (Pongamia pinnata for our younger children),

a sprawling Banyan (Ficus benghalensis for our middle-schoolers),

a long-limbed Acacia leucophloea for our high-schoolers and

an Albizzia odoratissima for our senior-most students, located in the ravine. 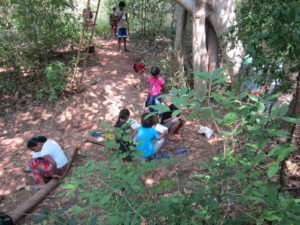 It was a time of learning about life on and around these trees. It was a time which awakened us to details we were barely aware of. It was a time where we encountered both unexpected surprises as well as periods of restlessness when minds find it difficult to be present in stillness. The question of what it means to pay attention both to the surrounding world as well as to the inner one was a primary focus during this mela.

We built machaans on our trees. The experience of the canopy world from the machaan perches was enchanting. We spent magical nights on the machaans as well as camped near our trees in the moonlight. 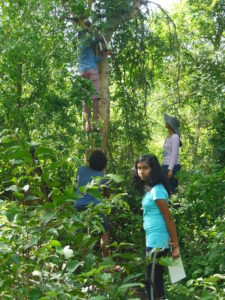 Students and teachers worked on themes of interest, understanding chosen areas through their own senses as well as with guidance. People learned about a range of areas. Leaf-fall patterns, ant diversity and behavior, grasses, the life of the bark, canopy maps were a few themes. We shared a glimpse of our learning and fascination on a Mela Day at the end of November.

This time of closeness to the world of our Mela trees has touched each of us in some way, however silent. We are fortunate to live in a partially wild land where you can vanish into a natural nook in a few minutes. On quiet weekends, when there are few footsteps around, creatures come closer. Painted spur fowls scuttle up pathways, a peacock visits the vegetable garden. We have a chance to move out and continue exploring this land. The invitation is open every day and night.

Reading Between the Lines : A Conversation, 2014

From our archives : Trek in the Himalayas, 2011