If Kausani can have a library can Varadenahalli be far behind?

About 40 kms from Bangalore city under the benevolent shadow of the Savandurga monolithic rock hill, lies a small village called Varadenahalli. To some of us, it has come to be home because our school, CFL has spread its roots in the welcoming soil of this village.

For some years now, the children of the Government school there have had energetic interactions with the school, both in academic subjects and in other ways. Teachers and students have interacted with the children formally in the school setting and informally on walks where they constantly hear childish voices call out, “Kallaje navare,tata.” More recently the teachers have also begun a womens outreach where they meet the women of the village once a month and talk and learn from each other.

Leela and I, having been with the school for many years, were wondering if we could actually start a small library for the village. But where could it be housed and who would run it? Both questions were answered in such simple ways that we could not help feeling like Shakespeare, that there is a divinity that shapes our ends! On a walk, we spotted the abandoned but standing room where the Anganwadi was. It was now used we were told for Bhajanes and for Ganesh Habba. In other words it was a public space! Check one. At the monthly meeting with women, two teenage girls expressed their keenness to run the library. Check two and we were off!

So we bought the books, a kindly soul made two wonderful shelves himself, other friends jumped in to paint the walls and windows, and the library was poised to GO! We took the books into the space and like a magnet,apart from the two girls, three other teenage boys also came in and within minutes they had grasped the system of stamping, numbering, accessing and sorting the books  into categories! A handful of younger children were made to stamp. The stamp may have smudged but their joy was unsullied! 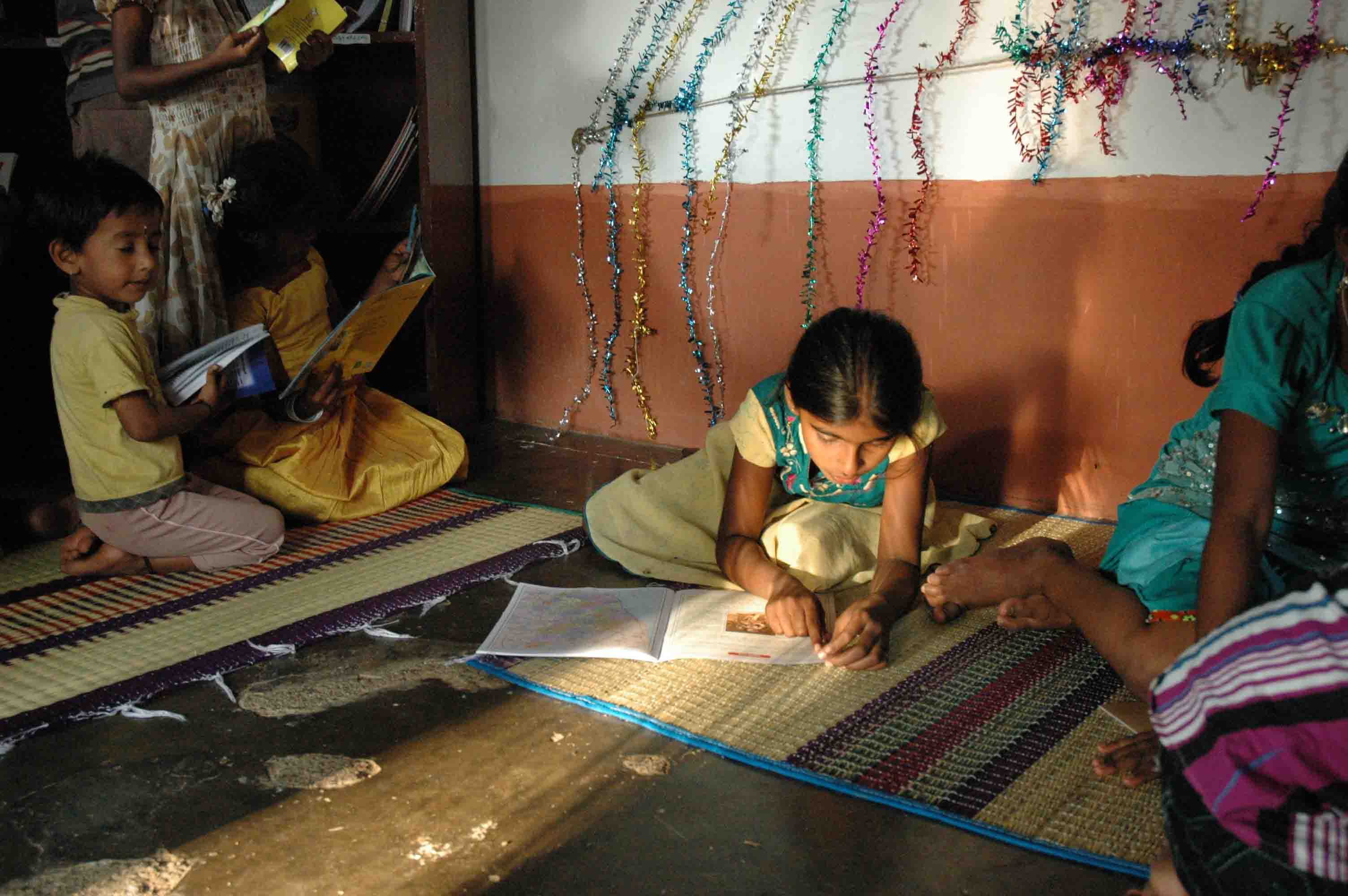 On Thursday Oct. 11th, the library ‘opened’ with the name they chose, “Jnana Gange Granthalaya.” Eager younger children who came in early sat down to make posters for the place. Leela told them all a story and also a few guidelines for using the library.

But one could see the children’s impatience to handle the books! A  steady stream of children followed by teenagers and finally by some young mothers  came in. They browsed, sat, read and  went off happily clutching their books, promising to take good care and return them. The youngsters from the village were totally in charge. I heard just  now that the enthusiasm is undiminished. What we need are more books for older children and for the adult women.

Any ideas anyone for small funds?

The dream and the reality