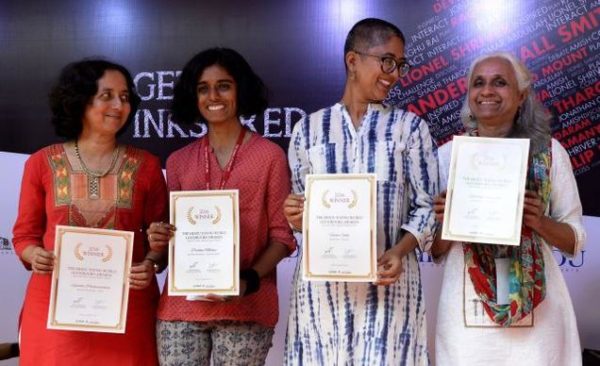 Sujatha Padmanabhan received the best picture book- story award for ‘Bumboo…The Donkey who would not budge’, published by Eklavya, 2015.

In the citation, the jury comprising Usha Mukunda, Sujata Noronha, Amruta Patil, Aashti Mudnani said: “An endearing story of a little donkey, living with a loving family high in the mountains of Ladakh. The relationship between the young girl and the donkey is delineated with sensitivity. Bumboo has an engaging storyline that manages to keep the suspense alive. For the reader, there is a slow but sure connection with the characters and personalities.”

Prabha Mallya bagged the award for the best picture book-illustrations for ‘The alphabet of animals and birds’ published by Red Turtle, 2014. In the citation, the jury said: “In describing collective nouns, the premise of the alphabet of animals and birds, Prabha Mallya notes that they exist not for utilitarian reasons, but to bring nuance, metaphor and imagination to language. Such quirky delights find kindred spirit in Prabha Mallya.”

Venita Coelho received the award for the best book- fiction for ‘Dead as a Dodo,’ published by Hachette, 2015. “A smart, witty, fast-paced novel about saving the Earth and animals from the reckless greed of human beings,” said the jury comprising Manjula Padmanabhan, Jai Arjun Singh and Anil Menon in the citation.

Vishakha Chanchani emerged the winner in the best book-non-fiction category for ‘The house that Sonabai built,’ published by Tulika, 2014. The book is about a remarkable woman who began experimenting with clay to create toys for her little son. “A heart warming and significant book about life, art and above all hope,” the citation read.

Goodbooks, a website for Indian children’s books, is supported by Wipro Applying Thought in Schools, Wipro’s social initiative in education. 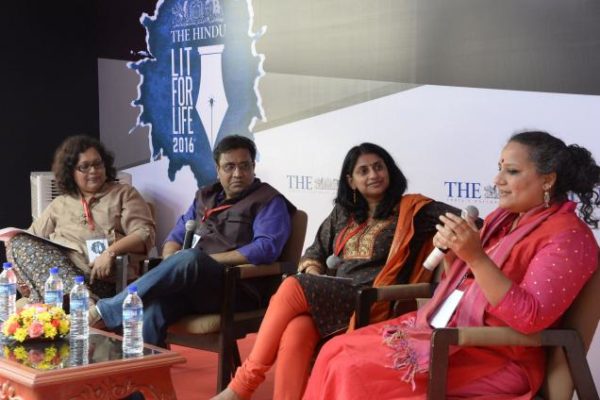 When Vidya Mani was a child, Enid Blyton opened up a world where tin cans often held sardines to feast on. Only, the cans she opened at home hardly ever held this delicacy, a staple in Blyton’s larder.

It took Vidya a while to realise that sardines were a type of fish, and even longer to figure out that they were not served out of cans in this part of the world. It was for reasons like this that the panellists at ‘A Good Book: Literature for Children in India’ — author Anil Menon, teacher/library educator Sujata Noronha and researcher Shailaja Menon, in conversation with writer and editor Vidya — agreed that Indian children need to read Indian books.

“Books serve as both mirrors and windows — they should reflect your own realities and give you an opportunity to see the realities of others. Growing up, we didn’t see our lives mirrored in the books we read — the lives they lived, the food they ate and the language they spoke were all different,” said Shailaja. Now, there is a boom in the number of Indian authors writing in English, and a steady growth among those writing, illustrating and publishing for children.

“We can actually reject books at the library now {her organisation, Bookworm, works with children and communities through a library programme}; that alone shows we have come a long way from a time when we were glad for any book that came our way,” said Sujata.

The panellists agreed that a distinct Indian voice is emerging, one which celebrates the factors that make us who we are, without being apologetic about it. However, Anil pointed out that children still need stories that have them addicted to reading, something with about 20 volumes to satisfy their hunger.

“We don’t have a Chetan Bhagat for children and, perhaps, we need one,” said Anil. While Vidya commented that children don’t always respond to what adults determine as quality literature, Sujata responded, “No child would read a good book if we left it up to displays, given the current bookshop scenario. Nurturing and urging is a professional responsibility.”

The panellists critiqued and commented on many aspects of writing, publishing and reviewing, and agreed that Indian literature for children still has a long way to go.

“We’ve made great strides and this is not to critique those strides, but to celebrate them and hold the bar higher,” said Shailaja.